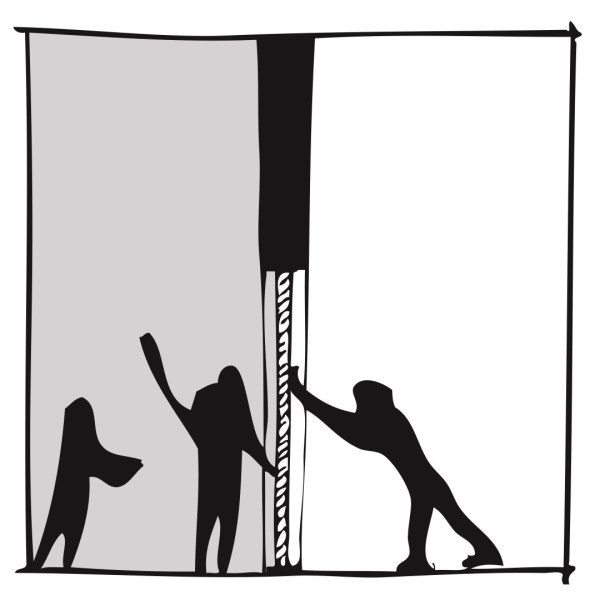 Neither love nor hate makes us debate. We do not want to have anything to do with those who we truly hate. We may ignore them, attack them with words or even physically, but we will not be willing to sit down and discuss anything with them. To our loved ones, on the contrary, we feel a very strong connection which we do not dare to put at risk for some banality.

Arendt says that both love and hate are “worldless” feelings. Those who hate each other, it seems, live in two different worlds and it is as if they burnt all the bridges that connected these worlds, so that now there is no way left to reach out to one another. And those who love each other do not care about the world around them. In the case of romantic love it even seems as though nothing could ever come between them. (Only in the most severe political situations are we prepared to overcome our hatred and to distance us from our loved ones.) Since debate in particular and political action in general is always concerned with public affairs and the problems of this world in which we live together, neither love nor hate are political sensations. They are apolitical as long as they are simply unconcerned with, and antipolitical as soon as they start to actively destroy the world that lies between us.

“This revelatory quality of speech and action comes to the fore where people are with others and neither for nor against them – that is, in sheer human togetherness. Although nobody knows whom he reveals when he discloses himself in deed or word, he must be willing to risk the disclosure, and this neither the doer of good works, who must be without self and preserve complete anonymity, nor the criminal, who must hide himself from others, can take upon themselves. Both are lonely figures, the one being for, the other against, all men” (HC: 180)

Hence neither the good deeds we do out of love for others nor the bad ones we commit against others belong to the field of political action. Physical violence as well as words that are meant to hurt, begins where all actual debate, which is essentially a form of speaking with each other, has come to an end. Genuine benevolence, on the other hand, implies selflessness. The benefactor, in order to be truly altruistic, has to remain anonymous and must even be selfforgetting.

Consequently, only forms of acting together with others can be political. And if people do act politically, they will be able to experience the joy of being in the company of their peers. Of course the political realm is full of conflicts over different interests and goals, but it is important to point out – and this is precisely Arendt’s intention – that the very essence of political action, and hence the condition of politics is the acting together of those who are neither friends nor foes but peers.

Political action is essentially a form of human togetherness that can appear only where people are active neither for nor against, but with others. Consequently, political space by definition excludes both altruism and violence.